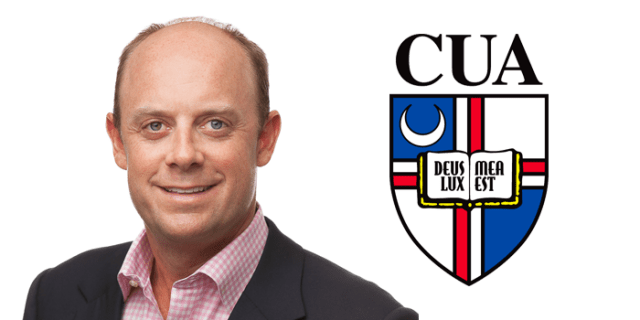 Tom O’Regan, B.A. 1998, graduated with a degree in financial management. “I took advantage of interactions with professors whenever I could. I viewed them as mentors.
I’ll never forget talking about stocks with a professor in 1996. He told me Apple was a company to watch,” says O’Regan. “That stayed with me and it was the start of my interest in assessing businesses, looking at their financial statements, and learning to predict the future value of a company.”

O’Regan, who is the CEO of Madison Logic, a global leader in account-based business-to-business marketing, says his parents were his earliest mentors. “I grew up in Westchester County, New York. My parents were very successful but we didn’t live a lavish lifestyle. They were hardworking, humble, and they believed in giving back.” He says their work ethic has provided a model for his career.

Before joining Madison Logic in 2014, O’Regan was CEO and principal of TOR Media Group, a boutique firm providing investment and programmatic trading solutions to clients in the tech industry. Before that, he was president and chief revenue officer of Martini Media.

As Madison Logic’s CEO, O’Regan extended the company’s global coverage to Asian and European markets. Last year they were acquired by Clarion Capital Partners, which was covered by financial news outlets including Fortune.

“Hard work leads to luck,” he says. “And I was lucky to be starting my career in New York City during the dot-com boom. I worked hard and advanced quickly.

“But when the bubble collapsed in the early 2000s, that was the best thing that could have happened to my career,” says O’Regan. “That’s what made me an innovator. I realized you can never get comfortable. You always have to be thinking a few steps ahead. You always have to be looking at where the market is heading.”

Innovation is not just key in starting up a new business, but for employees in any business as well, he says. “The employees who propose new ideas and different ways to do things, who are looking at what their employer needs to expand two, three years down the road — they are the ones who will get noticed and be successful.”